Their singing spread the virus shared their song launched their doom / The illness rang around them, resounded in the room . . .

Worked late to get some things done that I could not concentrate on with the seemingly constant noise of everyone congregating outside my office door (or in my office) until twice I had to ask them to please use the lounge. I don’t want to count the minutes wasted, how they add up to hours. If everyone were more professional. We could get our work done and THEN relax, have, oh, I don’t know, ICE CREAM. But no.

Worrying a bit about money. A. waltzed in this afternoon handing out payslips like Eva Peron. I waited to open mine, expecting nothing much and getting exactly that. “You two are so INDUSTRIOUS,” she crowed. And, for about the third time in as many months, asked, “What can I get you to make your jobs easier?” I bit my tongue and did not venture Umm, a manager?

T. is working till 9. I got home around 8, read and listened to a few poems from Rogan Kelly’s new online journal, The Night Heron Barks: really good stuff. Thought about trying to write some notes for a new poem, something I can work into a draft for the collaboration project I’m doing with Ed Madden. Ed sent me a new poem last week, the first in several months, but I haven’t even responded yet.

I did polish up my poem “Hemisphere” and sent it with 3 others to Mark Ward to consider for Impossible Archetype—this was a day or two before his deadline—and, bless him, that’s the poem he took. Which, upon re-reading it, I felt pretty good about. Not sure why I sat on it for that long. I need to believe more in my work. (He said to himself his entire life.)

The grow light kit I purchased back in December or was it January is bringing the fish pepper seedlings along nicely. I’d first planted three varieties of hardy violets but only one seedling emerged, a Corsican violet: slightly ruffled, narrow leaves. I’m hoping I can raise a little planter full from this one small seedling. Or maybe I’ll order more seeds and NOT keep them waiting in the fridge for three years. From same original seed batch, three nicely-developing seedlings of Kenilworth ivy—the largest is sending out lateral buds from the base and clearly wants to spread like a happy vine. This plant grew from rock crevices in Lewisburg—under the railroad trestle next to campus, but also from foundation cracks on some of the old homes in town. I love its resilience. And it flowers pretty much all summer and well into fall, if I remember correctly, and will hopefully reseed. For now, I plan to keep it in a hanging planter with some stones (it seems fond of limestone) until we (please) find a house.

Sent I think all the paperwork in today, scanning documents at work and emailing them to Ron, the loan officer at GE Credit Union, which is where Jeremy (T’s friend but by now he is *our* friend) recommended we go. All that’s left is to fill out the application. I think. I’m sure they’ll let us know if they need anything else.

My kitchen is not a seed vault. Well. Not a proper one. Seed packets kept in ziplock bags in the fridge door for several years: what kind of viability can I expect from 5-year-old canna seeds stored this way? Some of the daylilies sprouted, thinnest blades, but the roots never developed and they fell on their swords. Are the scruffy marigold pods from Mom’s garden? Or from the Lewisburg cemetery at least five years ago? Or are they even older?

To have the space to plant them all. To see what rises from that kind of hope.

On Daniel Barnum’s Names for Animals: 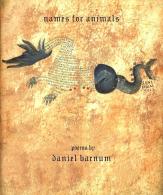 I go back to these poems again and again and every time I’m rewarded by something new. Daniel has written a brilliant collection, from the opening intense scrutiny of “Falconry” and gut-punch of “The B Word” to the restricted form of “Mother of Spiders” (“I wanted to solve loss”), these poems expand, contract, and breathe across the page. I’m still just wowed.

. . . why enlarge the circle of who
gets to hurt you? over the phone, his son,
my uncle, another man I’ve never
seen except on the internet
tells me, “we’re from bad people.”
I ask, “could you please be more
specific?” but he’s lost all
his details. those who know us both
swear we’re each other’s mirrors. how
I’m him, just paler.

. . . what’s line
of descent got to do with disposition? all
the men in my family are mad or addicts.
brain chemistry x alcohol + heroin /
cocaine. rage sustains them. I love
the ones I haven’t met. all the men
in the world hold power over me.
I don’t want to reduce this to an elegiac
ode to forefathers or the phallus,
but what do you call it when what
you want is what you want to abolish?

[from “The Town He Burned Down”]

Taylor: Check out this house, it’s like the Unabomber upgraded.

Week two of staying home. I am fortunate to be paid to do this. T is still going to work every day–people need food–but I don’t understand why Kroger doesn’t close more of its stores and offer free grocery pickup at those locations. Or why they continue to have at-risk employees (read: of a certain age) to come to work as if it were not a health risk.

Last night T was on a long rant about this and other things–we just paid almost $600 for a house inspection that turned up so many outrageous problems it was easy to walk away from the contract, easy as shucking a wet sock, though I’ve a lingering urge to shove said sock down the throat of the seller and the listing agent for their “move-in ready!” false advertising and wonder if surely there isn’t some recourse, some report we could file against such egregious fraud.

But back to T, who can get wound up, worked up into a long litany of complaints, of negativity, of outrageous claims that, frankly, can sap my general optimism or, worse, make me not want to be with him–not in the same room, or, you know, on the same planet. (This is who I married?) And though I can usually muster enough forbearance to just let him roll, let him get it out, which is the best way I know to be supportive even while he is saying at times the most awful things (“I hope these people actually die because I am so tired of waiting on customers wearing ridiculous ski masks which do nothing to protect you from the virus so why don’t you just die already or at least, I don’t know, stay at home and actually read some facts?”), it wears me down. It wears me down to be in the room with it, especially when it rolls out of him, wave after wave of it, until finally I had to say I’m letting you go on like this because I want you to get it out but I am telling you right now that I need you on board with me because I cannot navigate buying a house without your support. And you know what I am talking about.

And he goes to bed without saying goodnight, his body turned away from me, unresponsive to my touch, and this morning responds in monotone to the few questions I ask, and I wonder for a moment exactly which of us has overreacted until I flash back on another relationship and a dear friend and mentor, Cynthia, who gently shushed me, It’s not you, it’s him. It’s him. I knew it about him the moment I heard his voice.