I had not noticed when we first passed that the dog was down.   [dream]

I sewed I think 45 chapbooks this weekend; more to do just to catch up with the January releases, and four titles are coming out this month as well. Minions, where are you?

Stopped by Mother’s today to pick up a few shopping bags full of quilt fabric she’s getting rid of: at nearly 81, her hands are giving her lots of trouble (particularly the right hand; she can’t grip the steering wheel to drive right now) (but has never allowed me to drive her car, though I offer, and though my siblings have regularly driven her car) (I’m not sure where she gets the idea that I’m an unsafe driver). I mentioned a book I was reading, Atul Gawande’s Being Mortal, and some of his ideas about the development and subsequent deterioration of nursing homes and assisted living facilities. We talked about how, as we age, life becomes more about our relationships with people and much less about things. She agreed, but she has only three close friends left alive: one is housebound, in her 90s, and stone deaf; one is seriously impaired with Alzheimer’s; and one has end-stage cancer.

And many things are attached, of course, to our memories of the people we don’t want to forget. Still, it’s interesting how, over time, we find we’re ready to part with so much of our accumulated stuff.

My parents had a metal storage building constructed years ago–we call it the pole barn–and it’s umm, overflowing with furniture and boxes. When I moved back home from Pennsylvania three years ago, from a house to a single room in Mother’s house, everything I owned went into that pole barn, and still comprises maybe 10% of the contents. My siblings have furniture and boxes in storage there as well, though they have houses. I’m in a two-bedroom apartment, and even though I try to pick up one or two boxes every week I visit Mother–mainly books and papers that I sort through, it feels like I will never, ever, ever catch up.

One of the boxes I’ve been emptying this week is half-full of letters and postcards that belonged to my first partner, David; they date back to the 70s and 80s and I haven’t been able to throw them away. So I’m slowly scanning them and shredding the originals. And wondering who on earth would ever want to read them. Or my own journals and letters. What does one do with this ephemera?

I woke in the middle of the night with a terrible, crushing headache. Even as I made my way in the dark to the kitchen for some aspirin, touching the walls without my glasses, thinking I should have picked up my cell phone in case (of what? In case I pass out? What good would it do to have the phone at hand?)–even then, through the throbbing pain, I thought how good it is (what a blessing is what I actually thought) to live in a home I can navigate half-blind.

I chewed two aspirin and made my way back to bed, crawling in as quietly as I could, closing my eyes and feeling the various pains and pressures in my head, in my neck, down my shoulder. A blood-saturated cloud, a disturbance I could picture in my head, like a massive thunderstorm I had to pilot into: the only way past it was to enter its turbulence, its stresses and torques.

Hours later, almost noon, and I got up from bed and made my way back to the kitchen, this time for tylenol. Sat on the sofa, wrapping myself in a warm throw, watching the blurry traffic below our balcony on the bypass. The throw was soft but too warm–it felt like my chest could erupt–and I pulled one arm free, then another, and held them carefully in my lap, gauging the rotten curdle in my stomach, the heat spreading through my chest, the hammer and gong in my head–was it moving? Subsiding? This sort of headache hasn’t happened in a long while. It’s not so much that the pain goes away. It’s more like pushing my whole body through the eyehole of its needle till I am inside-out: the pain is still there but I end up somehow on the other side of it. And after a while, sometimes a day or two, I have walked away from it.

I’m not there yet.

This morning I posted two photos on FB of my chapbook wall: the stacked cube shelving that houses all of Seven Kitchens’ chapbooks (and folded pages sets and covers waiting to be sewn into chapbooks) (there’s a few shelves in the dining room that hold all the printed page sets and covers waiting to be folded). The first photo is from April of 2016, about a month after we moved into this apartment; I was still unboxing supplies and sorting everything into this new shelf system to see if I could make it work: 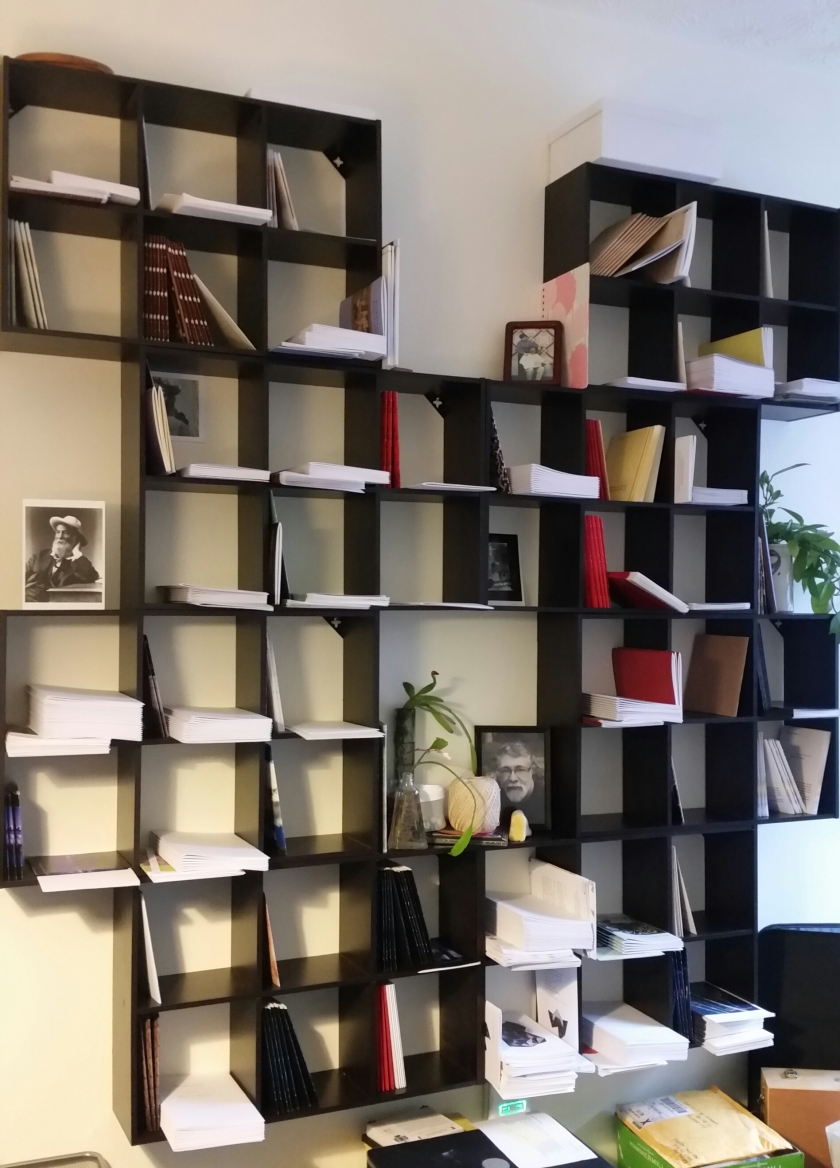 I recognize Crystal Boson’s The Queer Texas Prayerbook in the top left unit, center of second row, and Dave Bonta’s Breakdown: Banjo Poems just to the right of that. I also can pick out chaps by Matthew Wimberley, D. Gilson, Austin Gray, Christina Pacosz, and Hayden Saunier. But that’s because I am so familiar with the folding, trimming, and sewing. Chapbooks are pretty hard to recognize from the little sliver of spine.

The second photo was taken last week, and the first thing that stands out to me is how many more titles are shelved. There are more shelves, too: I think four 6-cube units added since 2016, and I may have room to add one more at the bottom left once I clear that stack of cardstock and page sets. What pleases me most is that, overall, I’m managing to keep more copies onhand of each title, something I’ve been working on all winter, toggling backward to print and assemble 10-12 copies of an older title while simultaneously pushing forward with a crazy production schedule of 12 new chapbooks between January and April of this year. 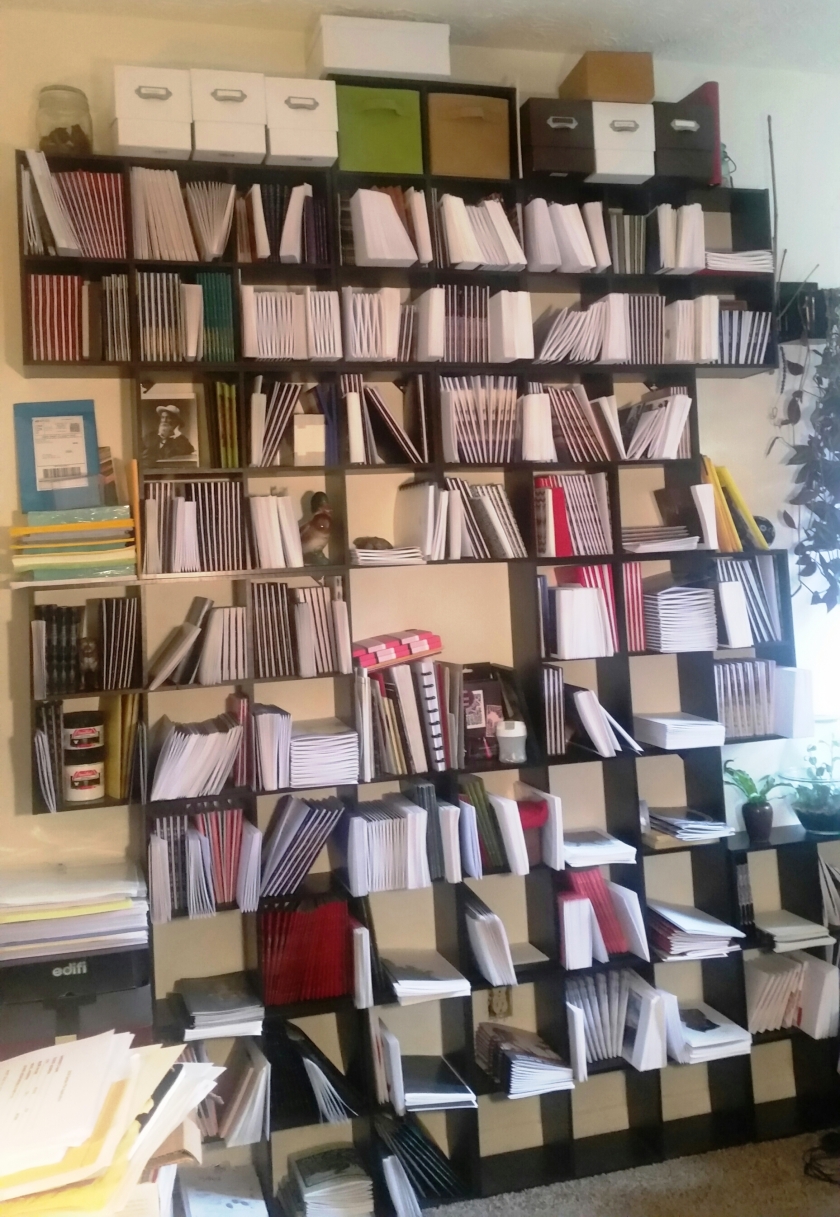 The chaps are arranged alphabetically by author, so from across the room I can find Ahl-Alvarez-Atkins-Barrington-Bauman-Beam-Bellin-Bensel-Bertram and so on, but, to be honest, sometimes I just stand there, freshly-tied copies in hand, and can’t for a few moments put my finger on where they are supposed to go. And lately, the thought keeps creeping in: What will happen to all this without me? Oh, Gibson, Hershman, Reagler, Madden, Johnson, Wiseman, Davis and Davis and Fox and 125 others–I have no one to inherit this project.

Ten years ago I imagined an editorial board, a few dedicated interns, a collaborative vision to take the press forward. In truth, despite much-appreciated love and support, the lion’s share of the operations has always fallen to me. And I don’t regret any of it. And I’m proud of what’s been accomplished, despite some embarrassing setbacks and a few terrible judgment calls over the years. But what’s never really evolved is an operational community.

Such thoughts weigh a little more heavily with each year that passes, partly because I’m aging and watching my siblings age, but also because I’m not getting much of my own writing done. My vision for Seven Kitchens Press has really never accommodated the hard truth that it takes away from my own writing.

But I have chosen it to be this way. I have set up this production schedule, these chapbook series; I dream of expanding the website to include interviews and audio and video, setting up readings, and maybe even attending AWP (or something better)–all to celebrate and promote the poets whose work I believe in. Doesn’t all this, in some way, suggest that I feel their work is more important than mine? What would it mean to give myself the same attention and support? How do I make that happen?

On Charif Shanahan’s Into Each Room We Enter without Knowing:

“sewing the two banks of skin across the thin blood river,” (“Ligament”)

I had to renew this one from the library just to spend more time re-reading; it gives a lot on the first pass but opens even more on multiple visits. (Or maybe I’m just a reader who needs that kind of time and immersion, but, for example, the line quoted above from “Ligament” fits neatly into the narrative of what’s going on in the poem but also–also, isolated as a single line, becomes a symbol of the book’s whole project: how to accommodate the blood of two shores?)

A quick thank you to the editors of ONE journal for accepting my poem, “Push,” for publication. The poem is part of a collaborative series I’ve been writing with Ed Madden; this acceptance is most encouraging!

The force of his going
blasts a crater

dust and lathe and horsehair plaster

and a kind of wormhole
through which, if I am careful to lie,
I might pass
into a new kind of living.

Her capitalistic version of love.

What is this compulsion to gather things?

I first read this chapbook in manuscript–it was then titled *Tongue Like a Knife*–and was very happy to learn that it would be published in the New-Generation African Poets set from Akashic Books. The new title (*Daughter Tongue*) evokes the collection’s connections and tensions well. The poems are quite varied in structure. For me, the heart of the chapbook, and my favorite poems, are “Proverb,” “A Mother Can See More Sitting Down Than a Child Standing Up,” and (especially) “GenderMotherFucker.”