One of the difficulties of moving from a larger to a smaller living space is that so much of what I could once put my hands on is now stored in boxes. We still have a half-dozen boxes in the dining room, and many in the attic, but the real challenge has been my bedroom/office: even though I lined one wall with bookcases and set up another in the little L-shaped area just outside my door, just for storing papers and press supplies, I can’t seem to get everything back in order and out of boxes.

The bookcases are nearly full. It turns out I had planned way ahead for the move by boxing roughly a third of my poetry collection, so now that I’m unpacking all my books, they seem to have multiplied. And there’s not enough room to keep them all out. Then I remember that not only did I have poetry books in my previous bedroom, but also in the dining room. I’m trying to cram ten pounds of shit into a five-pound bag, as my father would have said.

Cull, cull. How many poetry books does anyone need? Not really a fair question. I don’t go to movies. I don’t drink or go to bars. I don’t, in general, shop. So even though I may not need so many books, I still want them, although my attachment cycles in intensity: I can get by with my Collected O’Hara without also hanging onto Lunch Poems and Meditations in an Emergency, for example. Paperbackswap.com has helped me to cycle many books out of my collection (though some are still hopelessly “lost” in boxes since the move), even though it doesn’t reduce the number: every book one sends to another member earns a credit to be exchanged for another book. So it’s a good way to gradually “buy” titles on my wish list while also emptying limited space of duplicate copies.

I like living with books. I would rather read a book than engage with television, the internet, or (most of the time) people in general. (Work retail for a few years and see if you don’t feel the same about the latter.) But I suspect I’m a fairly shallow reader, dipping into ten or twelve books at a time, rarely reading straight through any one but instead sipping like a hummingbird from this flower and that, then coming back a day or two later to sip a little more.

The exception this summer has been Armistead Maupin’s Tales of the City series, which I’m re-reading straight through in anticipation of The Days of Anna Madrigal, set for release in January. Currently I’m on book four, Babycakes.

We live at 27, in a half-double (more like a one-third/ two-thirds) built in the 1820s. We rent from friends. We share a nice back yard and garden. Our dog lives half her days, it seems, at 29. Most evenings, we take a little time to socialize on the back deck, recount our respective days. Laughter, camaraderie, maybe a little wine. They’re straight; we’re gay. They have kids; we don’t. P is a writer and in fact was one of my students in an intro creative writing class I taught in the Pleistocene at Bucknell; she’s one of my favorite people in the world. We don’t feel like renters; we feel like family. One evening on the deck we simultaneously remarked on how much it–this–the whole vibe of sharing overlapping space and enjoying one another’s similarities and differences–felt like 28 Barbary Lane. We’re at 27; they’re at 29: it was easy and inevitable to dub the deck space 28. R & I bought brass house numbers the next day.

From Sparrow by Carol Muske-Dukes, a slender book of poems I’m sipping from this summer:

Nothing in our lives was ever usual.

Under my Seven Kitchens hat, I’m working on the following:

After months of not writing, I’ve somehow managed to squeeze out two poems today, both part of a project that’s been rattling around in my head for three or four years: Catches & Stays will be a series of poems in response to, in dialogue with, or launched by a line or fragment from other poems. Specifically, I’m selecting poems from Seven Kitchens chapbooks to serve as touchstones for the new work. I’m thrilled–thrilled–to be writing again.

The first poem, “Who Cannot,” starts with the fragment he is wasting his time trying to sing from Jeff Oaks’ poem “Who Cannot Read This.” Jeff’s poem appears in his chapbook, Shift, published in the Summer Kitchen Series in 2010.

The second poem, “Shutters,” begins with the fragment what shutters the relentless from Lisa Sewell’s poem “The Corrections.” Lisa’s poem appears in her chapbook, Long Corridor, published in the Keystone Series back in 2009. I’m currently typesetting a second edition of the chapbook for a fall release.

Very excited to see how this project develops, though I expect it will be hard to write on workdays. Still, one never knows. The hardest part is carving out the time to sit here at my laptop without guilt over all the other tasks that I’m setting aside for the chance, the hope, to write again.

Much gratitude to Jeff and Lisa for allowing me to publish their work in the first place. Jeff’s chapbook is long out of print, but Lisa’s will have a new incarnation soon.

Meanwhile, at Seven Kitchens, I’ve received the final draft of David Daniels’ Indecency (Robin Becker Prize co-winner) and will be typesetting the manuscript this week. Looking forward to seeing David’s cover design–the last one, for Breakfast in the Suburbs, was awesome.

The tree service has taken down one of the walnuts, but they’re leaving its twin, the maple. This makes me happy because I am so going to miss the massive sugar maple which they are taking down on Monday. I’m grateful that P&J involved us in the discussion of what to do about this tree–it’s their house, after all, though the yard and garden are very much a shared space in the best sense of the word. And everyone agreed that the maple was in its decline and could not be saved; to put it off was just inviting danger to us and the neighboring house.

I’m off work Monday. Don’t know if I’ll be able to stay here and watch.

Lovely packet of books in the mail this week from RL, who’s been encouraging me to look beyond my present circumstances. It’s true that I’ve been reading difficulty and unlikelihood as impossibility, which makes me sound horribly fixed in my ways. Even though that may be true, I hope it’s not.

I wear your insignia, therefore I wear death’s
insignia. Which means that nothing can hurt me.

And with these wings and flames, I pledge
allegiance to nothing: I can go anywhere.

:: Carol Muske-Dukes, “Passport: A Manifesto”
from her book Sparrow

He falls, he gets back up again

On Saturday I slipped while handing a printer down to a coworker and fell to the concrete floor in Receiving. My hip took the main impact–more specifically, my outer upper thigh just below my hip landed against a metal rail. I lay on the floor for a couple of minutes, assessing whether I’d broken anything, before realizing how very lucky I was not to have hit my head.

I’m fine. There’s a stupendous bruise, and I squelch a yelp whenever I sit or rise from sitting. But really, I’m feeling very lucky. Realizing that I would be very sore the next day, I went dutifully to the gym after my shift and did my usual workout. I’m glad I did.

Over at Seven Kitchens, I’m finishing the first ten copies of a limited-edition set: 26 signed & numbered copies of Ed Madden’s My Father’s House which will be given as donor premiums during his upcoming Kickstarter drive to fund the public concert performance of the poems. The campaign starts September 2nd.

I’ve also finalized the new edition of Lisa Sewell’s Long Corridor. The release date is October 1, but here’s a sneak peek at the new cover: 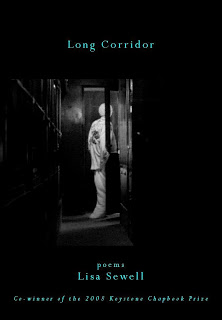 And I’m working on four more chapbook covers this week: the initial design for David Daniels’ Indecency just came in, and it’s a knockout; Dave Bonta’s Breakdown: Banjo Poems will feature a painting by Steven Sherrill; I’m narrowing down the images for The Salvager’s Arts by William Woolfitt; and David Eye has sent some great cover options for Rain Leaping Up When a Cab Goes Past.

Yesterday, on my day off, I managed to write a third poem in my Catches & Stays series: “And Go” leads off with the fragment another clunky fiction of seduction from Ed Madden’s poem “For what I assume is membership.” Ed’s poem appears in his out-of-print chapbook, Nest, which I published in the summer of 2010.

And tonight another poem, bit by bit, line by line, board by board laying it down, taking it up, feeling it change direction and intention until finally a kind of form asserted itself and made the last few lines hurtle into the zone with quick surprise. This fourth poem in the series, “Forcing Narcissus,” leads with the fragment you look like a self-portrait from RJ Gibson’s poem “With You as Vincent” in his chapbook, Scavenge (2010).

You look like a self-portrait but feel like a mirror:
you need us to know
how you are. Resplendent in whatever,
topped off with that faux-
. . .

I’m really very excited to be writing again. It’s not easy–it’s work, dammit–but these prompts are definitely triggering a range of voices and forms so far. I’m thinking one poem a week is an attainable goal; hope I can keep it going.

Email today from Rhett Watts: the final revision of her chapbook manuscript No Innocent Eye, which I’m publishing in the Rane Arroyo Series. Can’t wait to get it typeset and play with the cover design.

The reading period for this year’s Rane Arroyo Prize opens in just a few days: Seven Kitchens Press will be accepting manuscripts during the month of September from writers who have not yet published a book or chapbook of poetry. Once again, I’ll be reading every manuscript with my co-editor, Eduardo C. Corral. Looking forward to this!