I’m back. I’ve missed you, too. After juggling more plates than I could manage, I confess it was a small relief to hear several crash and splinter around me. Still picking and sorting.

Winter was a reminder that, when the show and pizzazz of topside greenery & finery, of fancy & ambition, are lopped by life’s cold shears, it’s always possible to return to one’s working class roots. And so I took a retail job in December, grateful to have gotten an interview, then another, then an offer. I’m working at Staples in Selinsgrove, about a 15-minute drive from home. There’s a Staples in Lewisburg, where we live, but they didn’t offer me an interview (phhhtt!).

I’ve been working my ass off. Learning something every day, mainly about the myriad nuances of the copy & print world and the machines we use at the store, though once in a while I make a brief but sincere human connection with a customer, many who say things like “I could sense that you were deeper.” Than what? (Don’t answer this, please.)

And the pay, as many of you must know, is staggeringly, mind-blowingly insufficient. I won’t make  other comparisons between my former life in academia to my current work week, except to say I thought that, with no essays to grade, I’d be writing more.

On the plus side, I have rocketed to my current level of part-time Copy Center Associate, which is a promotion (of sorts) over the level at which I was hired. I was even selected Associate of the Month for February. In short, ladies and gents, I am making lemonade. So. Much. Lemonade.

I also thought I’d somehow get ahead of the production schedule over at Seven Kitchens. Uhhh, no. I’m further behind than ever; it’s embarassing. Growing pains of a three-year-old with too-big ambitions? Maybe. Somewhat. But I’m in love with those ambitions (a new series for writers of color; a no-fee open reading period; our long-overdue anthology series; working with co-editors TK and EC).

Today at the store I met a young artist who needed to print some work for his portfolio. I was totally blown away by his work–fresh, creative, very insightful, very professional designs. I wished I’d had the budget to hire the guy right on the spot! (Someday, maybe, if I’m lucky and the press continues to grow . . .) Besides, I’m already lucky to have worked with some madly talented artists on our chapbook designs. I really do count my blessings in that regard.

So if you’re wondering what’s going on at the press, I’m still here. Our production schedule is seriously out of whack, but I hope to get caught up by the end of summer. How can I help, you ask? Aww, thanks. As soon as I have a couple of hours and a clearer mind, I need to write out a call for volunteers (interns) (whatever you want to call yourselves). I could use help in about a dozen areas–interviewing our authors, updating the Word Press site, researching libraries and other collections,  designing chapbook covers, trimming and folding pages, sewing/tying/assembling chapbooks, preparing review copies for mailing–these are just a few off the top of my head. And, of course, you can always buy our chapbooks; they make great gifts for the readers in your life–and shipping is free during National Poetry Month.

In which I’m sort of participating, but in a very low-key manner (as opposed to last year’s write-and-post-a-poem-each-day-in-April NaPoWriMo challenge madness). I’m re-reading all of our Seven Kitchens chapbooks, one each day, in the order that they were published, and selecting one line from each to work into a poem. It’s not going all that well, partly because I’m trying to catch up with other, more pressing tasks each evening when I get home from work, and partly because I just feel so tired a lot of the time. But even if I can’t write a poem a day, I’m determined to work through the sequence and see what comes of it.

On a somewhat related note (I’ll just toss this out there), is anyone interested in writing a collaborative poem or two? Bearing in mind that my writing schedule is very spotty right now? Hit me up; let’s talk about it.

Sadie’s wet nose woke me at 5:30 this morning. I thought it was Saturday evening as I got up, dressed, and headed downstairs to take her for a walk. Apparently, I slept straight through yesterday evening after coming home from work. Mehh, rest is what the body needs sometimes.

There were two text messages from my sister (I carry my cell phone and keep the camera setting on–you never know what you’ll see: an egret in the creek, curling birch bark against the light, petals on a wet black bough. . .): 1) “Marm has cling on letters to the kitchen window that state HAPPY EASTER! (the ! can be substituted for an i)” and 2) “Work your magic and I’ll make it happen.”

I know there are anagram generators out there, but I like trying the old school method. First to mind was a pithy spree, which I rather like for its sound, even if it is a bit lispy. Then I arrived at apathy spire and decided I could do no better on this easter Sunday, averse as I am to the mob of christians singing joy, joy, joy every year on this day in the park where Sadie takes her dumps.

But no one else was in the ark–err, park this morning as we walked our usual route, the rain misting gently, the streets empty for now, not a drunk Bucknell student in sight. Sadie nosed about, sometimes gently tugging on the leash if I took too long trying to focus the camera phone. A compact digital cam sounds nice, but there’d still be the tugging. How many dog-walking photographers do you know? (I can think of one, Jeff Oaks, whose joyful play with Bailey when I visited last fall thawed my unreadiness at believing there’d ever be a new dog in my life whom I loved as much as our original Sadie, and whose photos from their–his and Bailey’s–morning walks I always look forward to seeing on Facebook.)

I do have a great digital cam, a Canon Power Shot S2. It’s about five years old, I think, and it’s the cam that finally seduced me away from David’s old Canon with all the wonderful lenses, tripods, and accessories (which I was happy to pass along to my friend Gretchen last year). I enjoyed working in the darkroom at Bucknell when I taught there and dabbled with the photo club, but for me, digital wins because (a) it’s cheaper, (b) the satisfaction (or chagrin, depending) is pretty much immediate, and (c) I still don’t know what happens, ultimately, to all those photo processing chemicals, some of which I fear might end up in the river.

The Canon has a decent macro option, and I find that my preference in photography is for extreme close-up shots of very small objects (or portions thereof) and also, though unrelated, for images that play with shadows and low-light subjects.

So once in a while I’ll drag the camera along on Sadie’s walks, but mainly I rely on the phone’s built-in cam. This morning I took four shots (three on purpose–the fourth was a crosswalk stripe, totally blurred and of no interest):

Something about the daffodils in such dim light appealed to me, as if they themselves were a light source that was just waking up. (As I said, I’m drawn to shadows.)

This one is taken from our back yard; I cropped out the neighbor’s house at the end of the alley. A bit of moon through the budding crabapple. 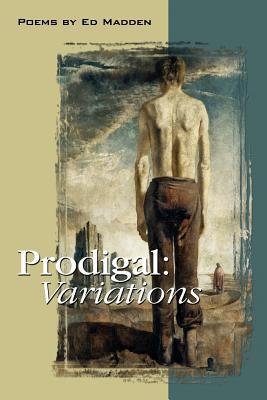 I’m completely in love with Ed Madden’s new book of poems, Prodigal: Variations (from Lethe Press), and have been reading it slowly, one or two poems a day, since it arrived earlier this week. Full disclosure: I published Ed’s chapbook, Nest, in a limited edition of 49 copies last summer. Some of those poems are here, but it’s not for their familiarity that I’m so drawn to this book. It’s simply gorgeous: attentive to detail, personal yet mythical, each poem draws me in quietly but with a sure-footed lyrical eye and ear. A gorgeous collection. Go read this book.

update: Here’s a link to Ed talking about his book on Charles Jensen’s web site.